True Faith can be Illustrated using a diving board analogy

1. The object of our faith is connected to the end goal.....

3.Believing is something that comes about automatically as a .... of 1 and 2. we do not make ourselves believe. for example, a baby learns to walk by seeing living example. He sees other people around him walking. He sees that it is possible to walk and he also wants to walk. Does the baby instantly walk? Of course not. He keeps trying to stand up and keeps falling down, over and over again. Eventually he is able to stand by himself. Then he tries to take a step, and falls down. he keeps trying over and over again.

5.Making the leap of faith is the point at which we pull together all that we have seen and experience and me take the plunge. We put it into action. 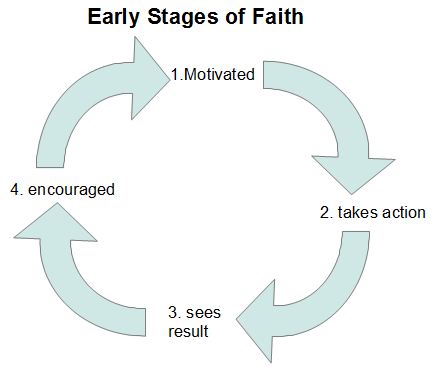 1. In the early stages of faith the person may be very scared and reluctant to do anything. However, seeing others doing similar things, and with some motivation and encouragement

2.he may take a tiny action and wait.

3. He doesn't know what will happen. Then (hopefully) he sees a positive response.

4, He is reassured a little and a tiny seed of faith is planted in him.

With more encouragement, and being a little less afraid, he takes another action and waits. soon he sees another positive response and his faith grows a tiny bit. This time he needs less encouragement to take another action. Then he is encouraged to take another action without waiting for the response of the previous action. As time goes by his tiny faith has grown sufficiently that he can be seen doing more and more actions without being prompted and without waiting for a response. Soon, as his faith grows and matures, he will be continuously performing the actions without waiting for any encouragement or without seeing the outcome of previous actions. Of course, he will still be noticing the outcomes of previous actions (which continue to build his faith) but his primary focus will be on doing.....

Without the actions, their is no growth.

LifeLines:
Stephen's Spiritual Journey
‹ Belief is Not Knowledge.... or Evidence up