For quite some time I have been thinking that Faith and Science should be doing the same thing, searching for that which is true. To me, a "person of faith" should be a diligent scientist, not just blindly following whatever is call "matters of faith."

This morning I listened to this video: Eugenie Scott: Crank Anthropology. One of the parts that interested me Started here:

"I think psuedoScience claims the mantel of science but fails to earn it. Not just being factually wrong, because, of course, you can be factually wrong and still be scientific. Most of the time scientists are wrong anyway, but you keep trying to do better. Pseudo-science practitioners failed to follow the rules or practices of Science, a major one of which is being willing to revise your explanations in the light of dis-confirming evidence."

There is a whole realm of people who make claims in the name of science.

Now, let me rephrase that above paragraph

"I think religion/Christianity claims the mantel of truth but fails to earn it. Not just being factually wrong, because, of course, you can be factually wrong and still be a truth-seeker. (Just like anyone else) Much of the time Christians are wrong anyway, but they fail to admit it.  Christians fail to follow the rules or practices of seeking truth, a major one of which is being willing to revise your thoughts and beliefs in the light of dis-confirming evidence."

There are many errors and untruths in the Christian belief system, yet many Christians refuse let go of those erroneous beliefs. Many are prideful and think that their belief is the only truth, and that every other belief is wrong. This belief hold them in bondage so that they can never grow beyond where they are. 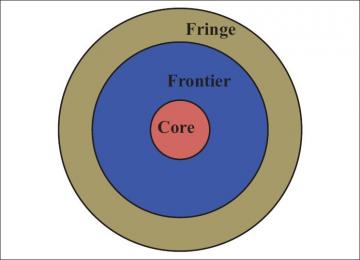 One large misconception among christians is that think that "seeking the truth" means "seeking Jesus". This is very ambiguous and unclear, what does that mean anyway? They read the verse that says, "I am the way, the truth, and the life." So, they think that if they "have Jesus", then they have the truth. Seeking truth is not as easy as "I sought, I found, now I have truth" Now, that is a total misunderstanding of the whole principle of seeking truth. Truth is not a person, but .....  Seeking truth is an ongoing process. You never full obtain the truth. Truth seeking is a lifelong process of constantly reexamining your own belief system against reality. Truth, in one sense, is simply, "things as they really are." There is a saying that goes, "We do not see the world as it is, rather we see it as we are." In our normal immature state we fail to see life as it really is. Rather we hold up our misconceptions as our truth, and hence we are living by a lie. But we don't know that, we don't see that. Our pride of "being right" keeps us from closely examining our own belief system and thus remain in bondage to our distorted sense of the truth.

Although this video is predominantly talking about science, I applied my of what she said to be equally applicable to religion and Christianity What do I mean by "religious"? Along this same vein I could just as well ask, "What do I mean by being 'Christian'". The term Christian is almost worthless, so many people make so many claims in the name of "being Christian". Likewise, so many people also make a wild variety of claims in the name of "Bible believing." There is a strong implication that to be Religious, Christian, or Bible believe it to be "right". I put all three of these almost in the same venue.

I so much more honor and respect the viewpoint and practices of true science more than religion. True science doesn't claim to be all knowing, ........

One of the HUGE faulty premises of religion comes in misunderstanding and mischaracterization of "faith." In religious circles faith is often expressed in the ... of just believe it. It doesn't matter that there is no evidence. All that matters is that there was a claim made, and that should be enough to believe. And to go further, those who “don’t believe”, those who are called unbelievers, are chided as being on their way to hell, where there will be tortured forever and forever without any mercy. Part of the process of keeping people in fear (of everlasting torture) is to keeping people from thinking, of critically examining what they are taught.

True faith goes hand in hand with true science. For there to be a claim, there must be evidence that stands up to scrutiny. For there to be extraordinary claims, there must be extraordinary evidence that stands up to extraordinary scrutiny. In addition, the evidence must be based upon already proven criteria. However, in much of the realm of religious faith, there is no real basis for such evidence. All we have is the assertion that we are to have faith that something is true just because a claim has been made. So, we have one faulty premise built upon another faulty premise over and over again. In Christianity there have been so many claims made by so many varieties of …., most under the subtle threat of “hell” if you don’t believe them. Here is my basic premise. Any type of assertion or claim that is made, with the threat or implication of everlasting torment if you don’t believe it, can be assumed to be false. Truth doesn’t need threats to validate it.